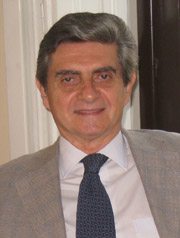 Hector Rodríguez Molnar is the name partner of the firm, heading the Corporate, Finance  and Environmental Practices of the Firm

Héctor Rodríguez Molnar is a practising attorney, with an LL.B. Degree in Law, issued by the Argentine Pontifical Catholic University in Buenos Aires, Argentina, in 1973 and validated in Spain for its equivalent Degree of “Licenciado en Derecho” by the Complutense University (Madrid) in 1978.

Héctor is married and has two children.

He has attended Seminars at Doctorate Level at the Complutense University in Madrid and passed a program in Foreign Trade and International Contracting at the Instituto de Empresa (Madrid) in 1978; achievement: “Cum‑Laude”.

He is also holder of an LL.M. Degree in Law issued by the School of Law of the University of Pennsylvania in 1981, and participated at a Program on “International and Regional Organisations” (European Community Law) given by the “Faculté Internationale de Droit Comparé” with seat at Strasbourg; program developed in three different levels and finally passed in 1979.

In his long practice as a corporate lawyer, Héctor has acted as outside counsel for clients in key areas such as the automobile industry, telecommunications (with regard to activities of both suppliers and operators), pharmaceutical business (mainly from the regulatory and environmental sides), waste treatment and disposal and energy (oil exploration and production). In the past, Héctor has also advised foreign banks in their domestic operations linked to the international part of the business and has assisted in developing environmental compliance instruments.

While the firm is mostly known because of its corporate expertise, environmental work accounts for a significant part of the total legal work done by the firm and the level of activities in the environmental sector is steady. The firm’s corporate practice always gives special consideration to the environmental factors involved in any industrial activity, so that international (mostly US and EU) clients are permanently in compliance with European Union and Spanish corporate as well as environmental regulations. See More

As a member of the Legal Practice Division (formerly, Section on Business Law) of the International Bar Association, a professional organisation with seat at London (U.K.), he was appointed to the Council of the Section on September 1992 and served for a term of four years. He is currently a member of the Sections on “Energy, Environment, Natural Resources and Infrastructure Law”; in this latter Section, Héctor acted as Vice‑Chairman of the Environmental Law Committee from September 1989 to October 1992, when the Committee was officially named “International Environmental Law”. He was again appointed Vice-Chairman of the IBA’s Environmental Health and Safety Law Committee for the period 2013/2014.

Héctor is fluent in Spanish and English and has a good knowledge of French. He is Official Sworn Translator (Intérprete Jurado) of English language, appointed by the Spanish Ministry of Foreign Affairs on September 3, 1985.